Main discussion area is here. Reply to a message to continue a discussion thread, or create your own new Topics.
Forum rules
Post Reply
1532 posts

FAKE guns will get you shot by real ones....

Did you notice AO and Stonewall took off all the GUN TOTING and GUN SHOOTING smileys??
Top

Thanks for your posts! Stonewall, your administrator ... just an "empty suit."
Top

Today's school shooting in Florida may have had less people shot if the teachers, principal and vice principal had been armed.
Top

That sort of idiotic NRA propaganda has got to stop. Enough, already.

The goal is not to reduce the number of our children who are slaughtered in schools. It is to stop the slaughter.

Yesterday's school shooting in Florida would not have happened if guns had been kept out of the hands of everybody in the school building.

Many other countries figured out how to do this long aga. It is not difficult, although the transition from today's utter chaos and lawlessness to sensible control will take decades. Hundreds of millions of guns are scattered across the land, within easy reach of nearly everybody.

But we have to start. Now.

What I wrote was not propaganda. It was only a statement of my opinion.

You are dreaming if you think this nation is going to follow the way of much of the world by disarming it's citizens.

As long as things remain status quo, taking counter measures to reduce the numbers of senseless murders by arming responsible people who are

According to the Belle of the NRA, no psycho killer is going to even think about pulling off a mass shooting when they know there are guns on the premises that might shoot back. This is as foolish a statement as any thus far. The case at hand....Mr. Cruz.....There were, according to first hand student interview, more than one uniformed, armed security people on that campus in Florida. Having recently attended that school, Mr. Cruz would have been aware of that fact. Didn't seem to bother him much. So much for the "Trump Theory of Inside The Mind of a Killer".

And, how much of a bonus would we have to pay an ununiformed teacher to whip out his concealed handgun and take on an AR-15? If he or she were lucky enough to prolong the gun fight until the swat team showed up, like as not they'd be the first one shot.

Best we stick to trying to prevent the event from starting, rather than fanaticizing about how to handle it after it's too late. Background checks, age limits, firearm education and, yes, certain levels of gun control........and that includes depriving some socially inept, self loathing souls whose girlfriend just broke up with them from getting a killing machine.

The Pinkertons are there to keep the students in line....not to play Chuck Norris 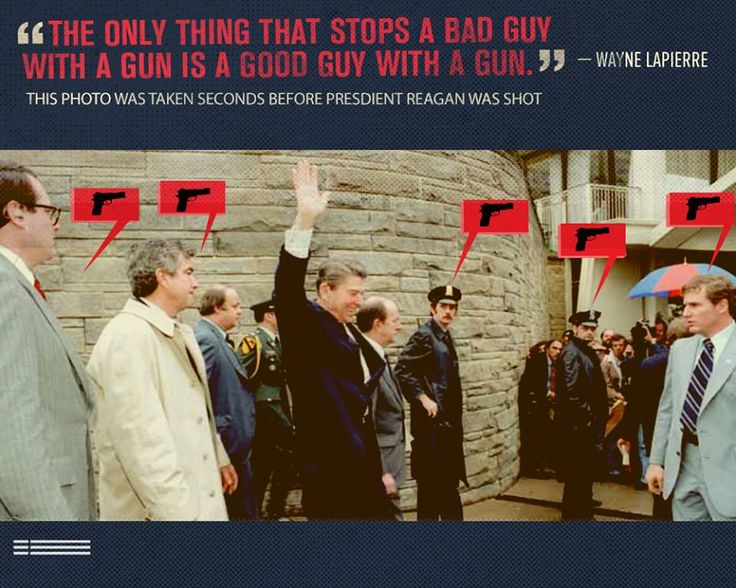 The paid armed security on site did noting for about four minutes while listening to shots being fired. I don't know why.
Armed teachers would be acting in self defence as well as protecting their students and would most likely act rather than stand arouund and watch.
It would be wonderful if no shooter ever made it onto a campus or if some way was worked out to keep guns out of the hands of people who would murder innocent people, but I think that's a pipe dream.
Last edited by Cannoneer on 2018 Feb 24 13:50, edited 1 time in total.
Top

Ridiculous. The solution is not yet more and more guns, all on a hair trigger ready to shoot instantaneously.

Part of the solution is to keep the gun out of the hands of people like Hinckley who should never be allowed to touch one.

But, for the unpteenth time, the tiniest part of the gun problem is crime, mass killings, and political assassinations.

Most killings have nothing to do with the above. They have everything to do with suicide and momentary rage/ killing of friends and relatives ... only because a gun was immediately at hand. Countries that control gun availability responsibly do not have such killings.

Dream on wise one.
As long as the USA is a country it's citizens will keep and bear arms. And the more the libs work to fragment the country the more determined those of us on the right will be to hold on to our guns.
Top

I have coondog "the bar 6 shooter", and AO "the plinker from here to Alaska" down as fearful stooges against self defense. Check.
Top

and explains its history from 1791 to now.

Blah Blah Blah, when BLAH should be enough.

Since a well regulated Militia is a good thing, to protect a Free State,
the right of THE PEOPLE TO KEEP AND BEAR ARMS SHALL NOT BE INFRINGED.

It is clear. In and of itself, in context, as an INDIVIDUAL RIGHT, etc. This has always been true. It has always been a Natural Right in fact to ball up a fist, take up a club or knife or gun for self defense of a Sovereign Individual, and for a Sovereign "State" to maintain that capability/RIGHT.

For the record, AO should not own a gun. Period.

Kurt Andersen does not know what he's writing about.
Yes it's true that the second amendment was not an issue for anyone until gun rights were being taken away from some of the people.
For example Chichago, and New York.
Until then even cannons and machineguns were legal and everyone knew the second amendment gave Americans the right to keep arms.
For all of you libs, that means have them in their possession. And to bear arms. Again for you libs, that means the right to carry arms.
It's a shame that so many educated people do not understand something as simple as a writen sentence.
Top

Well wise and Jugtggler, are a couple of lame liberal cartoons the best you can do to bury my last post insted of comming up with an answer?

I'll make it a little clearer this time so even the most dull witted of liberals can understand what the wording of the second amendment means.

A well regulated Matilia, (When called out that applied to all able bodied males between the age of 16 and 60)

being necessary to a free State, (The meaning here should be plain, even to a liberral.)

The right (Something that cannot be taken away without just cause)

of the people (Citizens of the Uniter States)

to keep (To have in their possesion)

And bear (To have on or with their person)

I feel sure that insted of getting a response to this post, I'll just see more stupid cartoons.

By the way, did you see the artical about the mother and daughter in Tulsa who used pistols against a robber with a shotgun?
Top

"If your only tool is a hammer, every problem looks like Donald Trump."
Top
Post Reply
[phpBB Debug] PHP Warning: in file [ROOT]/vendor/twig/twig/lib/Twig/Extension/Core.php on line 1266: count(): Parameter must be an array or an object that implements Countable