Main discussion area is here. Reply to a message to continue a discussion thread, or create your own new Topics.
Forum rules
Post Reply
37 posts

Rockbridge
Posts: 8
Joined: 2009 Feb 21 18:09
[phpBB Debug] PHP Warning: in file [ROOT]/vendor/twig/twig/lib/Twig/Extension/Core.php on line 1266: count(): Parameter must be an array or an object that implements Countable

Looking back is sometimes good and sometimes bad. Either way, it generates sensations, which are usually not rooted in reality, so much, as our perception of reality. That perception is based on what we place value on at the time.

Values change. Life is fluid. However, my perception of Rockbridge County, as being the most beautiful place on earth, has never changed. My memories of driving on the Skyline Drive in a snow storm, from Lexington to Waynesboro, have never faded. At the time, I was a 19 years old conscript, slated, to become cannon fodder, for the aspirations of corrupt political minds. The snow accumulating on the Parkway was a silent cleansing flurry of refreshing, purifying, whiteness to my miserable soul. The visual beauty of the Shenandoah Valley below gave breath taking substance to all that was right on the earth, in spite of presumed horrors looming in the most desolate portions of my subconscious being.

Sean323
[phpBB Debug] PHP Warning: in file [ROOT]/vendor/twig/twig/lib/Twig/Extension/Core.php on line 1266: count(): Parameter must be an array or an object that implements Countable

Hello, I am looking for any information, stories and anecdotes anyone might have on my grandfather, Thomas F. Kennan MD, my grandmother Helen Kennan, their children Tom and Myra, and their housekeeper Pearl. My grandfather lived in Raphine from around 1930-1980. His address in Raphine was 54 Doc Hill, just off Raphine Rd. I am writing a book on my family history to be passed down to future generations. My Grandfather was a country doctor who had his practice attached to his house. He made house calls and traveled all over the region taking care of people. He delivered over 3000 babies in and around Raphine and surrounding areas during those 50+ years. My grandmother passed away in 1980 and my grandfather passed away in 1988. They are both buried in the Mt. Carmel Church cemetary in Steeles Tavern. My father, Tom is 82 and doing well. I just visited Raphine and their old house 2 days ago after 32 years. On that day I also visited my Aunt Myra (Earhart) and her son Patrick whom I have not seen in 32 years. Also on that day I visited with Jane S. Kennan of Staunton, my Grandfathers' second wife, whom he married in 1980 and whom I have not seen since the mid 80's. That was a very interesting day.

You can post a reply to my message here, or you can email me. My email address is: sckennan41@comcast.net.

So very sad. The Grinchiest of Christmases has been visited upon Rockbridge County.

A formal announcement of the closing of has been made. We've had so many good times there, it is such a shame to see it go.

Can we hope there is some way, some how, to make it not be so?

paxham
[phpBB Debug] PHP Warning: in file [ROOT]/vendor/twig/twig/lib/Twig/Extension/Core.php on line 1266: count(): Parameter must be an array or an object that implements Countable

The Natural Bridge of Virginia

Haven't been here in years, but I heard about a petition to rescue Natural Bridge from private ownership (maybe to late now), so I signed it and spread the word. If not now, then next time maybe.

Re: The Natural Bridge of Virginia

I stumbled upon an amazing collection of .

I recognize many people and places from my youth and really appreciate the effort that must have gone into it.

Outstanding! Thanks. I'll be buying the book this week. I love this town.
Top

Trend Setter
Posts: 100
Joined: 2007 Oct 29 13:10
[phpBB Debug] PHP Warning: in file [ROOT]/vendor/twig/twig/lib/Twig/Extension/Core.php on line 1266: count(): Parameter must be an array or an object that implements Countable

This is not exactly specific to Rockbridge County, but it is an opportunity for Virginians to perform in a major new motion picture being filmed here.

If this is for you or anybody in your family or circle of friends, let them know about this for Loving.

This was just as important in its day as this week's gay marriage decision.

Been auditioning for children's roles for half a century and haven't landed one yet.

Not a damned Dalmation!
Top

Sally Mann, childhood contemporary (her dad was our family doc), has a really nice interview done by Charlie Rose .

Our families used to be quite close but she's focused so on her work the best we can hope for any more is a chance encounter at Krogers!

There's a lot of excellence here in Rockbridge, and Sally is one of our treasures.

The Seldom Scene is performing again tonight at Lime Kiln theater. As is my annual custom, I shall be there in attendance. These musicians are at the top of their form and have been since the 1970s.
"If your only tool is a hammer, every problem looks like Donald Trump."
Top

I took this video at last Saturday's Seldom Scene performance, the first one I have ever attended that had not a single member of the original group present. Ben Eldridge is ailing with sciatica. As usual, they are fantastic.

On a cultural note: Cabin in the Sky is playing on Turner Classic Movies at 10:00 pm. This one might drag himself away from the continuing episodes of "The Amazing Mr.Trump Goes to the Circus" and prequel the upcoming meteor shower by revisiting this immortal moral classic simply for the benefit of it's spiritually uplifting qualities. And because the Daily show is in re-runs.

Wow, the Rockbridge Forum is back. Who woulda thunk? Good news.

Is Foamhenge really living under a death sentence?

I think we should save it by moving it to the middle of the VMI parade grounds. Yes, that's the ticket. 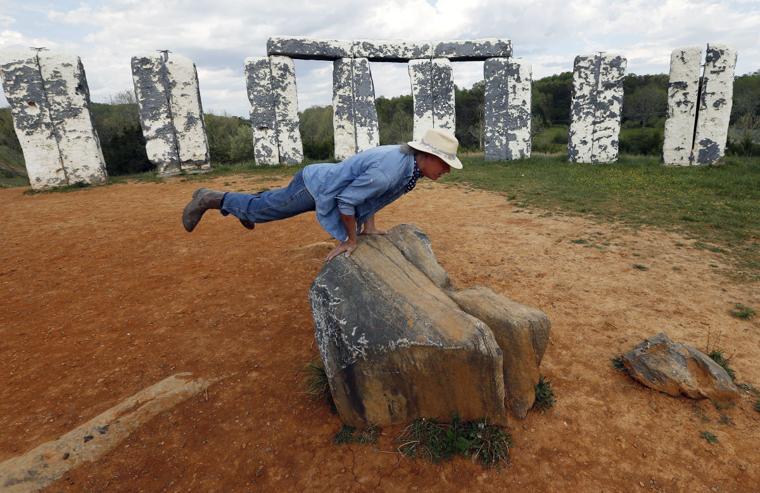 PS. And so I was. It was one of the best Seldom Scene performances I've ever attended, and I've been there for LOTS of them. The weather cleared, to make the Lime Kiln bowl the best performance venue in the world and the guys came through with musical excellence and precision.

All the original Seldom Scene are now rotated out of the group, two by death (John Duffey & Mike Auldridge), John Starling (of Lexington) and Tom Gray moved on to other things, and Ben Eldridge just retired because of infirmities that eventually descend upon us all. The "newbies" have maintained their exceptional level of excellence and innovation, and have brought to it new skills and nuances. For example, Ricky Simpkins not only does great banjo but also fiddle, his brother Ronnie Simpkins is great on bass, Lou Reid does mandolin and guitar with a hint of reminiscence for Duffey, Dudley Connell does great guitar and vocals. and Fred Travers is the most worth successor to the great Auldridge on Dobro.

Regrettably, I'll miss the Ben Eldridge Tribute on July 17 at the Birchmere because we're out of country. It will be historic, with all of the present and former Seldom Scene in attendance, and a list of unannounced superstars (Emmylou Harris is the only one I'm certain of, but expect more surprises. Linda?)
"If your only tool is a hammer, every problem looks like Donald Trump."
Top
Post Reply
[phpBB Debug] PHP Warning: in file [ROOT]/vendor/twig/twig/lib/Twig/Extension/Core.php on line 1266: count(): Parameter must be an array or an object that implements Countable