Main discussion area is here. Reply to a message to continue a discussion thread, or create your own new Topics.
Forum rules
Post Reply
207 posts

Hard truths no matter your Politics

Thank god she's there, that she's so smart, so energetic, and so willing to fight the difficult battles for us.

The greedy would, while they hypocritically genuflect to capitalism, repeatedly extract socialistic government bailouts for the rich, at the expense of the poor and middle class.

Now if she would come clean to the Cherokee Nation...

Whoa, and How whiteman

The progressive darling and her supporters are painfully incurious about what is clear by all accounts.

EW is no Cherokee.

Listen to genealogist Twila Barnes, or don't. Scrutinize EW's fallacious claim to native American heritage, or don't.
Care about her affirmative action hiring and press or not. I don't care really. It says more about you than me...

In the end, conservative extremists ALWAYS deflect from the serious policy issue being addressed by Warren, to try to get us to focus on their scurrilous ad hominem attacks.

Here's a little that's good for perspective. It's not as bad as purveyors of deficit hysteria would have us believe.

On the other hand, it is still a deficit which means the debt continues to grow, if more slowly. We'll have to address it.
Top

Obama cheerleading at EVERY turn...

I see no NUMBER of what the annual deficit will be. NO PROJECTION.

So let us be clear. Under Bush, in his last year it was 455 billion, a number which Obama called "irresponsible and unpatriotic" in a debate with McCain. Then, Obama trippled down and doubled down with annual deficits of 1.1 to 1.6 TRILLION.

Now Nudge, do you know or would you care to project in all your brilliance what the deficit will be for the year now that you have educated us all? Well?

I will make a prediction on this years number.

The deficit will CERTAINLY be BIGGER than Bush's largest deficit of 455 billion. It will in fact be towards a trillion.

What say you Auntie Nudge?

On a side not this forum is a hoot.

Any thoughts that are not Fox News hysterical sound bytes?

Well look. Times are tough. Money don't grow on trees and we have to cover ever new and growing government schemes on every level. Take Obamacare. Government, especially Federal government is wasteful and expensive. The healthcare.gov website at the cost of 1,000 million dollars makes the point. The Federal government could be cut in half. Seriously. Half as many Federal employees and half as much money. Seriously we would be FINE.

That money and those personnel would be redirected within the economic marketplace and State/Local government. Growing a one size fits all top down authoritarian political economic construct is insane. But we are doing it, and the Democratic Party is leading the way. It sucks Fangz and I hope good people like yourself come around. We are too far down the rabbit hole. Let the People and the States KEEP more money my friend...

"One of Life's Little Angels"
Top

It's funny. I again and again RESPOND and speak to the CRAP you throw up. I take it on POINTEDLY.

You just put up bumper sticker posters and gibberish. You don't make a simple point and DIALOG...

Fangz, you really are not impressing me. I have been much maligned, but not with any true grit...

I am losing faith in your DESIRE to be effective because you are just stinking up this forum Sister.

Fangz, do you think we could SHRINK the size and scope of the Federal Govenment?

Across the board? By what percentage? By both dollars and employees?

I swear you progressives act all outraged but my gosh...
Top

A thoughtful piece from The Guardian. We sure aren't rowing this boat alone. As long as the powers that be (that is read as CORPORATE INTERESTS....not Obama, Liberals, Conservatives, Baggers, Immigrants, etc) can keep us divided and not focused on the wholesale corporate theft going on worldwide, then they win and we lose.............. big time.

It is the same in government and in business. When you let ideology-spouting narrow-minded jerks take over an enterprise, disaster is way more likely than success. 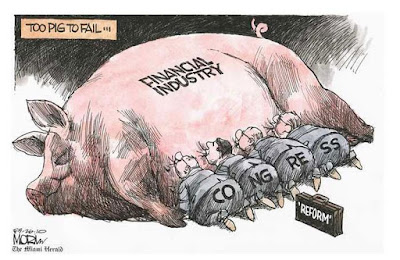 Rand gets it right I think.

I really love your clear bias. The hit piece on Ayn Rand is interesting for it's shallowness. So I call your hedge fund manager who was clearly off in his individual thinking, and RAISE you the collective governmental bureaucratic nightmare that is the Democrat ACA otherwise known as Obamacare. It will HURT more than it helps.

Fangz I like the cartoon. I just hope you are able to place Democratic members of Congress into those suits...
crux identifies with American Principles. Personal Liberty, Respect and Limited government.
He is a classic liberal, a libertarian at heart, and a conservative in the classical sense...
Top

The "Real American's" idolatry of someone born and educated in Russia is found to be amusing at best.

Less amusing is the methodology employed by John Galt (destruction and sabotage) in Atlas Shrugged which seems to have been adopted by those contemporary "Rugged Individualists" who identify with Rand's philosophy (except, apparently, her statements concerning logic vs guns).

So you built a railroad. Made it run. The idea that you accomplished this outside the framework of a society created by others is absurd. The idea that you owe nothing to society in return for creating that framework is nothing more than arrogance and selfishness.....which has it's own price.

So you bow down to Free Market Capitalism. You want to live according to the "Law of the Jungle"? Survival of the fittest? Fine, but you should remember that, in the jungle, once you have it all.....once your food supply has been exhausted, you become inconsequential and eventually become extinct.

In the world of humans, there is also the inevitability that, before you get it all, the prey will engage their own survival instincts and come to take it back. They are, given the incentive, as capable of single minded self interest as you are, particularly when survival is at stake.

Civilization collapses. Other predators rise to take your place.

The Chinese come, take you away and put you to manufacturing i-phones.

Russian Immigrants! Really? Why not Davy Crockett? He killed a "Bar" when he was only 3!
Top

Stonewall did you edit me and add my signature?

Taking a look at this real time clock is depressing. The sad fact is, Obama and by their support, his voters, have done nothing to stop the trend. DEBT DEBT DEBT does not equal JOBS JOBS JOBS. It is depressing. Obama in 5 years is approaching a DOUBLING of our National Debt. 2.7 trillion to go. He aught to be able to rack that up in the next two years. The only folks in D.C. that offer hope in this regard are Tea Party limited government types.

Recently my Little Brother posted a silly bumper sticker. "There goes the Socialist Snow Plow". Folks, it is about APPROPRIATE government. Local Public Works Departments. Makes some sense but state of the art and innovation often begins where the LPWD ends.

Another example? The equation of the Massachusetts State health care scheme vs. Obamacare. Two different animals. If you believe bureaucracy is better, that bigger bureaucratic administrative efforts pay off, I can not help you. Obamacare has wiped out college and even State health Care programs that got basic affordable care to people locally.

Maybe this is not that important to you. This debt. States have an advantage in management of systems. They have to be fiscally responsible. States have to balance budgets. They can not borrow and print like D.C. The Progressive Rush for one size fits all top down Central State planning and regulation of EVERYTHING is maddening. That is the train we are on. Some of us are not content.

I like the stats on the right column about population, labor participation, and government employees. Do the math and you will find that 1 person
in 75 works for the Federal Government. WOW. 1 person in 13 works for Government (local,state,federal). Amazing.
Top
Post Reply
[phpBB Debug] PHP Warning: in file [ROOT]/vendor/twig/twig/lib/Twig/Extension/Core.php on line 1266: count(): Parameter must be an array or an object that implements Countable